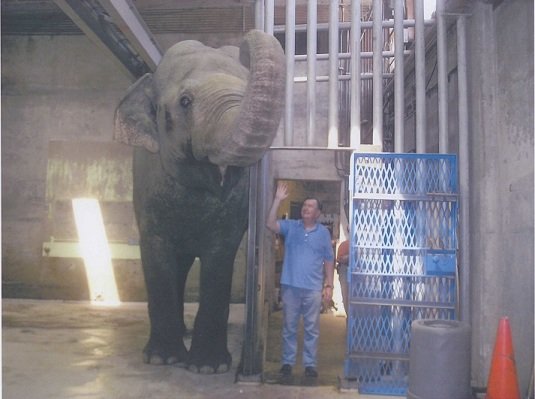 Over the past years, Mallard Medical has designed and built lung ventilators for humans, neonatal mice, small animals, dolphins, and large animals up to 18,000 lbs. (6,364 Kilograms)

In January of 2007, Mallard Medical in Redding, California, received a phone call from Oregon State University’s veterinary college. They needed to do a surgical left tusk removal of Mr. Tusko, an Asian elephant at the Portland Oregon Zoo. Could they put together 2 Mallard model 2800Cs large animal anesthesia ventilators to ventilate him during surgery? Years earlier, this had been done with the elephant, Miss Megan, at the Kansas City Zoo. When I learned that Mr. Tusko was 14,000 lbs. (6000kgs), I said no. He was twice the size of Miss Megan.

If you can give us some time, Mallard will build a ventilator for Mr. Tusko (see picture). Inside the large white cylinder is a 180-liter weather balloon which will function as a rebreathing bag. The rectangular box sitting on the top of the cylinder is the ventilator. It’s very high flow rate will compress the rebreathing bag inside the cylinder and provide the tidal volume to the patient. Tidal volume 10-125 liters. Inspiratory flow rate 10-1,100 liters per minute. Two Tech 5 isoflurane vaporizers (not shown). The two canisters in front are for soda-lime with directional valves on top. Fresh gas is provided by two 0-10 flowmeters. Manual flush button for flush.

The entire assembly is mounted on a mobile cart. Total weight 540 lbs. (245 kilograms).

The patient may breathe spontaneously on this system. Also, an I.M.V. technique may be administered, or fully controlled mechanical ventilation.

Mr. Tusko’s first surgery was in April 2007. The surgical staff consisted of 7 veterinarians, one human surgeon who had experience in removing elephant tusks, two board-certified anesthesiologists, clinicians from Portland Zoom, many volunteers, and myself to operate the microprocessor-based ventilator.

His keeper instructed Mr. Tusko to lie down on the deflated waterbed with his left side facing up. A special anesthesia formulary medication for induction of mega animals was given IV. Three of us intubated Mr. Tusko with a custom-made 45mm ID endotracheal tube with an inflatable cuff, 8 ft (2.3 meters) long. The proximal end was connected to the ventilator breathing circuit and secured (see picture).

As requested, I had pre-loaded the rebreathing bad with 4% Isoflurane. Starting out, I did manual ventilation to establish tidal volume and ventilator breath per minute rate. During maintenance Iso was reduced to 2.5%

Monitoring was done by the 2 anesthesiologists, a multi-parameter anesthesia monitor and periodic arterial blood gases.

Mechanical ventilation was established at 4 to 6 b.p.m Inspiratory time was 4 to 6 seconds. Tidal volume 80 to 100 liters. Peak inspiratory pressure 25 to 30 cmH20

Mr. Tusko’s left tusk had been cut off flush to his face many years ago. Power industrial tools and chisels were being used to cut up and remove the tusk piece by piece. It was very labor-intensive. At 4.5 hours, it still had not all been removed. The waterbed was pushing Mr. Tusko’s back of his head against a steel post. The lead veterinarian called the surgery.

Two months later, we went back for the second surgery. This gave me some time to make changes to the ventilator, which I had learned from the first surgery.

The second surgery took 5 hours. Total surgical time 9.5 hours. Finally, one of the surgeons held the last piece of tusk, high in the air to the cheers of all involved. They were inside of Tusko’s head 24 inches (54 cm)

I was instructed to hyperventilate Mr. Tusko with 100% oxygen to start a washout of the anesthesia agent. When the doctors felt it was time, we disconnected the ventilator and removed the endotracheal tube. Within one hour, Mr. Tusko was back on his feet. Pain medication was started. Over time, he fully recovered with the surgical opening granulating closed from the bottom up with much therapy, including lavage. At one point, Mr. Tusko learned how to whistle out of the small opening before it closed. Further details and pictures of the surgery can be seen at mallardmedical.net (elephant surgery). One year later, I visited Mr. Tusko at the Portland Zoo, and he remembered me (see photo).

Elephants are highly intelligent gentle giants with a strong sense of family, heard, and a complete social structure.

We are always here to help. Send us a message or request a quote by clicking the button below.

Request a Quote
Send a Message